We have a crisis in St. Louis. Gun violence and homicide are at levels we haven’t seen in almost 10 years. And just recently, St. Louis had 6 homicides in a just half a day. The tragedy occurring in our streets is heart-wrenching and frustrating to anyone who cares for this city. Right now there are many opinions on what to do. Citizens are frustrated, baffled on how to address this, and our leaders only offer excuses.

However, this is a problem we CAN solve.

Cities across America have implemented policing policies that target and reduce gun violence and homicide. We can do the same in St. Louis. It just takes leadership with the vision and passion to make it happen.

The City of St. Louis has an unacceptable level of crime. While some neighborhoods are safer than others, every homicide, no matter where it occurs, affects all of us.

However, cities across America when confronted with an unacceptable level of homicide and gun violence, have taken steps to focus efforts and reduce these crimes. We can implement these policies here.

This Community Policing policy has drastically reduced gun crime and homicide in Kansas City, Minneapolis and Cincinnati among many others.

These policies are designed to engage the community and rebuild trust with residents, especially in the African-American community. They focus specifically on the groups of individuals committing a majority of crime and intervene.  Each group is confronted and offered a choice to stop, to put down the guns and drugs. In return for exiting an outlaw lifestyle, these individuals are offered social services to help gain employment, a GED, or other services.

In city after city, time and time again, these criminals choose to re-enter society and end the cycle of violence. We can heal the divide in our community and reduce crime and violence. It just takes the right leadership to make it happen.

The specific policy I am advocating was devised in 1995. In the early 1990’s, the City of Boston, when confronted with an unacceptable level of homicide, decided to confront gun violence among youths directly. The policing strategy they utilized produced “a 63 percent reduction in youth homicide and a 30 percent reduction in homicide citywide, what has been called the “Boston Miracle.[1]“ For the sake of comparison, a 30% decrease in homicide in STL would mean 48 fewer people killed next year and hundreds more uninjured.

Since that time, cities across America participating with this group have seen dramatic results. The people who developed this policing strategy have started a non-profit group, the National Network for Safe Communities, whose sole purpose is to assist cities implement this policy correctly. This strategy doesn’t require military vehicles, cameras, drones, gun courts, changes in state law or even more police officers. Just the leadership to change policy.

Recently, news from our cross state neighbor, Kansas City, is that homicide has dropped to the lowest rate in 40 years. Kansas City works with this group to utilize this policing strategy. We can too. The St. Louis Post-Dispatch has discovered this policy and agreed in a recent editorial.

The only change we need to make this happen is a change in attitude from our elected leadership. As Alderman, I won’t rest until we use a policing strategy that makes sense and our streets are safe.

More About the Strategy:

“The Group Violence Intervention (GVI) has shown repeatedly that a city can dramatically reduce homicide and gun violence when community members and law enforcement join together to directly engage with these groups and clearly communicate 1) a credible, moral message against violence; 2) a credible law enforcement message about the consequences of further violence; and 3) a genuine offer of help for those who want it …. A real working partnership among stakeholders within law enforcement, community members and social services is the strategy’s most important element and also its greatest challenge. The explicit aim is to reduce pro-violence peer dynamics within gangs by creating collective accountability, fostering internal dynamics that deter violence, establishing community norms and standards against violence, and giving gang members who want it an “honorable exit” from the street life.”

The International Association of Firefighters Local 73 voted to support Kevin McKinney for Alderman of the 8th Ward. 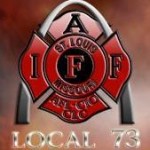 The office of Alderman is an important position in which office holders must carefully weigh the agendas of a presiding mayor’s administration with that of the needs of their constituents. Additionally, that office should also consider the needs of those who make up the human infrastructure of the city; those employed in its service.

The members of International Association of Firefighters (IAFF) Local 73 provide a substantial part of the public safety net in the City of St. Louis by dutifully responding to thousands of fire, rescue, and EMS calls per year. IAFF Local 73 is, of course, concerned with the fair treatment of those members, but also with the forward progression of the City of St. Louis. This city is our city as well and for the good of all, we want it to succeed. We believe this is possible without leaving anyone behind; citizen or servant.

As we’ve officially entered the 2015 Election season, our members and executive board are paying keen attention to the aldermanic candidates. We were honored to host many of these thoughtful candidates as they put forth their visions to our membership. We believe that with these candidates there is a great opportunity to replace the tired machine politics of the past with innovative leadership reflective of a city bounding forward.

With that said, on behalf of the International Association of Firefighters Local 73, I proudly announce the following endorsements for the office of Alderman for the City of St. Louis:

President of the Board of Aldermen: Lewis Reed

This list is by no means exhaustive and for those candidates in wards yet to receive our endorsement, we certainly continue to offer the invitation for you to present your visions as well.

Kevin is proud to have the support of so many dedicated and courageous First Responders.

Kevin was interviewed today about his candidacy for Alderman by Diane Zoga of KMOV Newschannel 4. See the Story below:

Oops, Somethings wrong. Could not authenticate you..
Please check that you have entered your Twitter API token information correctly.